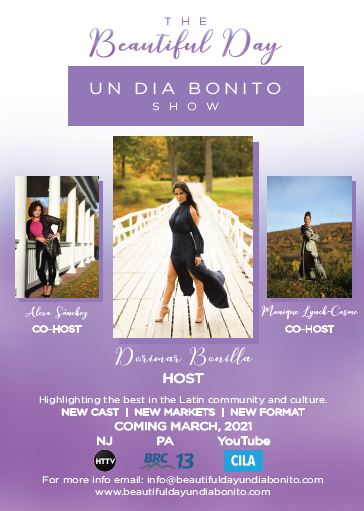 Entering its 4th Season, The Beautiful Day Un Dia Bonito Show is excited to announce its new host, new format with added co-hosts, and new markets.  This lifestyle show’s mission is to highlight the best of the Latin Community and Culture, and features guests making a positive impact. With the new configuration of the program the Host will lead the show with a variety of topics and guests, while the Co-Hosts will feature segments on the Real Estate and Wellness & Fitness industries they represent.  “With the natural growth of the show, we made the decision to switch the format from a Host format to a Host and 2 Co-Hosts format.  This allowed us to spread the show’s wings with women from various backgrounds and voices.”  Say Executive Producer, Gil Coronado.

Joining the Cast for the premiere episode is Queen of Freestyle, Popular WKTU DJ, and Actress is the one and only Judy Torres. “We are thrilled to highlight Latin Artist Judy Torres on our debut episode, not only because of her impressive music and DJ Career, but also her acting career which has gone onto inspire many people within the Latin community.  We are looking forward to learning more about Judy Torres and are excited for her to perform.” says Coronado.  The show will also feature segments in Latin cuisine, music, traditions, entertainment, finance, community involvement, and more.

Kicking off this new format is International Talent Dorimar Bonilla whose credits include choreographer and pro-dancer on the Latin Dancing With The Stars shows “Mi Sueno Es Bailar” seasons 2 & 3 on Estrella TV, and “Mira Quien Baila” season 4, on Univision.  A versatile entertainer who performed on Las Vegas stages for a decade and an entertainment reporter for the Vegas Entertainment Network for 3 years. The Puerto Rican native also traveled the world as a Headliner for Celebrity Cruises and has developed entertainment productions of her own.  “As the host of The Beautiful Day Un Día Bonito Show I couldn’t be more excited and proud to bring light to our Latin community, it’s incredible people, and our beautiful culture.  Through this platform, I look forward to inspiring our viewers to wish and aim for a more inclusive world filled with hope, harmony, and much love!” says Host Dorimar Bonilla.

Carrying the Real Estate segments will be Co-Host Alexa Sanchez who is a Multi-Million Dollar Top Real Estate Producer, an Advocate, leader and Manager of The Special Olympics, and a National Real Estate Speaker.  Monique Lynch-Cosme, who specializes in the field of Fitness and Wellness, is excited to share her journey and path to this lifestyle through featured sections on this subject.  Mrs. Cosme-Lynch is also a brand ambassador for “Icondolls” and “WRun”,  both clothing lines of fitness wear.

Who: General Public and Press