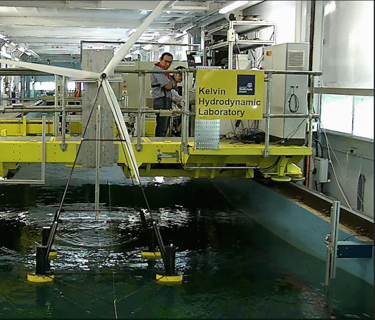 (YourDigitalWall Editorial):- Boston, Massachusetts Sep 6, 2022 (Issuewire.com) – T-Omega Wind Inc. (TOW) completed successful wave tank testing with a 1:60 scale prototype of its floating offshore wind turbine – which, at full scale, weighs less than 100 tons per MW. The next generation TOW turbine rode over scale-adjusted wave heights of 3m, 12m, 18m, and an extreme rogue wave of 30m (98 feet). These tests were performed in July 2022 at the University of Strathclyde in Glasgow, Scotland – shortly before the TOW team announced their National Science Foundation STTR grant.

“The Kelvin Hydrodynamics Laboratory (KHL) performed a model scale hydrodynamics test of a 10MW floating wind turbine for T-Omega Wind. This is the lightest 1 to 60th scaled floating wind model I have ever tested since I joined the laboratory. With a designed full-scale mass to power ratio under 100 tons per megawatt, and a full-scale draft less than 5 meters, the model successfully rode a storm sea state with an equivalent full-scale significant wave height of 18 meters. A 30-meter full-scale equivalent maximum wave height was observed within that storm sea state, and it was pushing the upper limit of our wavemakers.

Together with the project principal investigator Prof Maurizio Collu, and the head of the department Prof Feargal Brennan, we are pleased and excited to be involved in evaluating this novel disruptive offshore-wind technology. We wish T-Omega Wind well in its exciting development, and we also encourage other offshore wind innovators to evaluate their concepts with us. ” — Dr. Saishuai Dai, Project Manager of KHL under the department of Naval Architecture, Ocean and Marine Engineering of the University of Strathclyde.

Jim Papadopoulos (PhD MIT), Co-Founder and Chief Engineer at TOW added: “This testing was a high point of my year! Everyone who sees our design has had questions about wave behavior, and these high-precision trials put those doubts to rest. 30m waves are just about the largest storm waves found in any ocean. In our goal to democratize offshore wind, we designed TOW turbines, unlike conventional ocean wind turbines. TOW uses multiple lightweight towers in an efficient pyramid layout – which eliminates 80% of the underwater weight required by other designs. This lowers cost, eases towing, reduces the needed steel thickness, and can be used in depths from 20m to 2,500m. Once certified, we’ll be a dominant technology for offshore wind, and ready to compete for US & international wind farm orders – all while supporting local jobs.”

T-Omega Wind, Inc. has radically redesigned the wind turbine, from the water – up. TOW turbines tolerate wave motions, riding over the waves and weathervaning with the wind like a ship at anchor. The prototype tested at Strathclyde was a 1:60 scale of a 10MW turbine – which would be ~120 meters tall and power about 5,000 homes per unit. T-Omega Wind is dedicated to the principle that sustainable energy is the right of all people, and TOW turbines have the potential to democratize offshore wind globally. 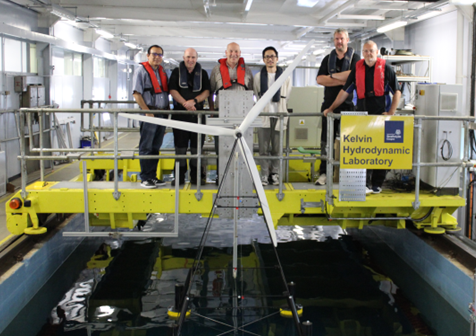