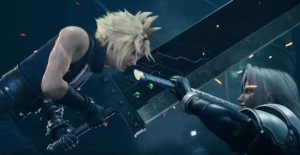 The day broke with a new update from the Square Enix, expecting to get a new trailer for the upcoming gameplay Final Fantasy VII Remake. New Final Fantasy VII Remake Trailer Reveals A Ton Of Major Characters And Story Elements  including the dubbed “Theme Song Trailer” which goes on for nearly four minutes. There is tons of new things that have caught the attention, so it is worth watching the trailer for the awesomeness it delivers.

The trailer starts with the same pattern the fans are familiar with, resonating with the original 1997 release. It captures Tifa and Cloud in their childhood days, where they used to meet on top of the well in their hometown of Nibelheim. Cloud tells Tifa in the trailer about his dreams and aims in life that is becoming a soldier and wins great battles to change the history, like Sephiroth before him.

Then we are taken straight to the scene where Cloud, Tifa, and Aerith are present in front of a massive tube containing the body of JENOVA that is the heart of the original game. The scene turns epic when Sephiroth is seen standing between Cloud and JENOVA. What is profound here that in the last few episodes of trailers showed as if Sephiroth were only appearing in Cloud’s imagination. However, the wheels have turned when we realize that it was not just a dream as Tifa and Aerith now can very clearly see him.

In the trailer, we get a look of the Honey Bee In which is an adult-oriented club. Here Cloud takes his female disguise. We are introduced with Cloud as a woman which recreates one of the most entertaining scenes from the first disc of the original game.

Many significant characters are revealed in the latest trailer. We get the first look of Reeve, the main conscience of the Shinra Company. We are introduced with another new character Scarlett, as the head of weapons development, involving a Shinra soldier as a footstool. Another first glimpse of a new character, Palmer is there as the portly head of Shinra’s space division.

But the magic card of the trailer is Red XIII.  Red XIII is a part of the Midgar portion of the original game that did not come up till now. His elongated absence from the previous trailers actually scared many loyal fans away in a thought that he might not be a part of the new storyline.

We have met the head of Shinra’s science division, Hojo for the first time. Hojo seems to play an important part in the game who will handle a great role in the JENOVA project that connects all loose ends of the entire story.

Besides, all the plethora of characters, JENOVA’s first presence was most striking among all. It’s a tiny clip from a boss fight that will take place late in the game. It has got the fans baffled to watch Cloud, Tifa, and Aerith are in a battle with the Calamity from the Skies herself. Final Fantasy VII Remake Is about to release worldwide on April 10, 2020, on the play station four consoles.