President Joe Biden’s inauguration last week saw a young poet capturing the hearts of people around the country. She is Amanda Gorman, a rising star who is taking over her success right to the Super Bowl. Her reading on the inauguration day also garnered her praises from the Obamas.

The announcement came from the NFL officially on 27th January, Wednesday. The statement said that Gorman is set to recite one of her original poems ahead of the Super Bowl LV. She will be performing at the pregame ceremony. Her piece will acknowledge and recognize three of the honorary game captains. All of them were selected by the League for their commitment to supporting their respective communities during the course of the coronavirus pandemic and the lockdown. These include Los Angeles educator Trimaine Davis, Tampa nurse Suzie Dorner, and Marine veteran James Martin. All of them will be recognized by the league for their unparalleled contribution and for undertaking humanitarian responsibilities.

All of 22, she is the first person ever to be named in the National Youth Poet Laureate. During Biden’s inauguration, she did a reading of ‘The Hill We Climb’ and received widespread acknowledgment for its thematic message of hope and recovery. The poem was addressed to the crumbling condition of the country. The poem was directed particularly to the attack on the Capitol on January 6. She received extensive appreciation on social media including former President Barack Obama. He took to Twitter to share that her poem means more than just for that moment. Oprah Winfrey also said that she has never been so proud to see another young woman rise to the epitome of creative and social art.

In an interview with The New York Times, Gorman shared the meaning behind her poem. She said that at this point, everyone needs to own up to the realities if we wish to move forward. She described this theme as a significant touchstone of her poem. She also added that the poem also constitutes elements of grief, hope, horror, and unity. But ultimately what makes the poem stand out is that there is a breath of joy inscribed in the poem that makes it so significant. She said the last strain of theme was directed at the good things that people gathered to celebrate at the inauguration.

Owing to the ongoing pandemic, this year’s Super Bowl will be a little different from that of last year with a small audience. It is going to take place on February 7. Some of the artists who will be joining include The Weekend who will rule the stage for the halftime show, Miley Cyrus will also be headlining a tailgate concert sponsored by TikTok. Other artists include Jazmine Sullivan, Eric Church, and H.E.R.

Super Bowl is one of the biggest events in the country and this year, the new changes will set history in the course of its league.

Myanmar Putsch: A Protester Might Be Dead From A Gunshot By The Police Force

President Joe Biden’s inauguration last week saw a young poet capturing the hearts of people around the country. She is Amanda Gorman, a rising star who is taking over her success right to the Super Bowl. Her reading on the inauguration day also garnered her praises from the Obamas. […] 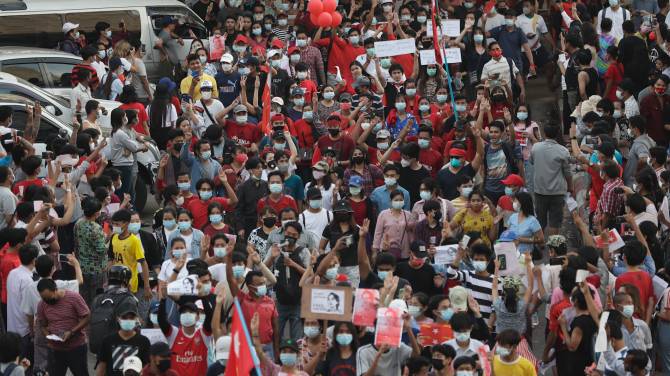