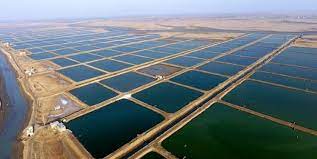 Atlasmeigoo is a company active in producing farmed shrimp in Bushehr/Iran. This company produces 100 tons of shrimp per year. In this location, there is a huge shrimp farming site( see the image). The water of the site is provided directly from the ocean. There are some other companies active here too.

We want to tell you about the shrimp production capacities of Iran, methods of production, and the share of Bushehr province in this production.

Today, the shrimp farming industry is one of the most prosperous and profitable activities in the field of aquaculture. Bushehr province is one of the important poles of the shrimp farming industry in the country due to benefiting from the Persian Gulf.
According to the head of the Iranian Fisheries Organization during his visit to Bushehr province, more than 58 thousand tons of shrimp are produced in the country, and the share of Bushehr province in 1400 was 28 thousand tons; This amount includes more than 50% of the total shrimp production in Iran. The amount of sea shrimp fishing in our country is nearly 4000 tons, of which 2400 tons are caught in Bushehr province.
Now we will have a brief look at the various methods of shrimp farming.
There are three methods of shrimp production: traditional, semi-intensive, and intensive.
1-Traditional method: Traditional shrimp breeding is considered the easiest method. In this breeding system, corporate-formulated foods are not used and water is not changed. The pools used in this type of system have an irregular shape and size.
In the traditional method, the density of larval shrimp is very low and usually, there are 3000 to 5000 larval shrimp per hectare. In this method, water is replaced by tides.

2- Semi-dense method: This is an improved method of the traditional method in which regular ponds are used. In this method, the density of baby shrimp varies from 200,000 to 500,000 larvae per hectare. In addition to the natural food available in the pool, the feeding of shrimp is done daily with formulated or fresh supplementary food.

3. Dense method: This method requires capital and advanced technology. The pools used in this system are called Japanese pools. In the dense system, more than one million baby shrimps are stored.

Shrimp export
Iranian shrimp is tasty and has high quality; therefore, it has many fans in the international arena, and for this reason, a major part of Iran’s farmed shrimp is exported.
Domestic consumption of farmed shrimp is 5% and 95% of it is exported abroad. Also, the consumption of sea shrimp caught inside the country is 25% and 75% of it is sold in international markets.
Iran’s farmed shrimp, whose species are western white and Vannamei, is known in all markets of the world; But sea shrimp, especially Bushehr’s green tiger (simisul cactus), is very famous and has a world reputation, and in fact, it is considered as a brand. The size of this type of shrimp reaches 100 grams.
The size and quality of exported shrimp vary depending on the customer’s demand. Exported shrimp are packaged and sent in different sizes.
It is natural that exported shrimps must be of excellent quality, and if they do not receive a passing grade from the relevant organizations in the initial tests, they will not receive the necessary permits for export.
In the discussion of shrimp export, there are a series of obstacles and problems, which include: a lack of monetary exchange due to the embargo on banks, the high cost of exports, the instability of the dollar in the market, and its direct impact on the final price of shrimp, administrative bureaucracy, etc.
For ease of work, several solutions are suggested to foreign buying companies and domestic exporting companies; Carrying out money transfer operations through an exchange, using a third country as an intermediary for transportation, registering a company, or communicating with an intermediary company to follow up and implement work procedures in that country, finding a company that is the link between you and foreign buyers, importing Currency from sales through exchange with importers.
Due to existing sanctions and their effect on the process of exporting goods, usually, the exported shrimp are sent to different destinations without a brand and in white cartons; However, some companies have a representative code and by that, they print their brand on the product.
One of the problems of the commercial sector in Iran is the issue of professional marketing for the product in the world markets, and this problem also exists regarding the farmed shrimp product. It is hoped that by increasing information and knowledge about product marketing in global markets, we will witness the improvement and development of farmed shrimp exports to other countries.

(YourDigitalWall Editorial):- Bushehr, Iran Oct 6, 2022 (Issuewire.com) – A look at the shrimp production industry in Iran and it’s export Atlasmeigoo is a company active in producing farmed shrimp in Bushehr/Iran. This company produces 100 tons of shrimp per year. In this location, there is a huge shrimp farming site( see […]