On Thursday, hundreds of pro-democracy protestors have rallied in Bangkok for the resignation of the government and they have defied warnings from authorities about the soaring coronavirus cases in the kingdom.

The marches came on the 89th anniversary of the Siamese Revolution- the uprising that has transformed Thailand from an absolute monarchy to a constitutional monarchy.

Bangkok has been rocked by near-daily protests against the government of Prime Minister Prayut Chan-O-Cha in the second half of 2020 but the pro-democracy movement has lost steam after the outbreak of the virus and the jailing of the student leaders.

Authorities have also clamped down on public gatherings as the kingdom grapples with the third wave of infections with the daily case toll hovering around the 3,000 marks.

Hundreds gathered at Democracy Monument, a major intersection in Bangkok despite police warnings, and marched in the direction of Parliament House to protest against the rule of Prayut, the former military chief who came to power in a 2014 coup.

Early-bird protestors have also gathered at the intersection before dawn for a candlelight ceremony.

A 16-year-old student protestor said that she is not worried about the coronavirus risk.

Wed Jul 7 , 2021
There is hush-hush diplomacy, in-person visits, and quite unsurprisingly a very public agreement on Iran. Antony Blinken, the US Secretary of State, and Yair Lapid, the Israeli Foreign Minister met in Rome on Sunday as their new government looks to turn the page on former President Donald Trump […] 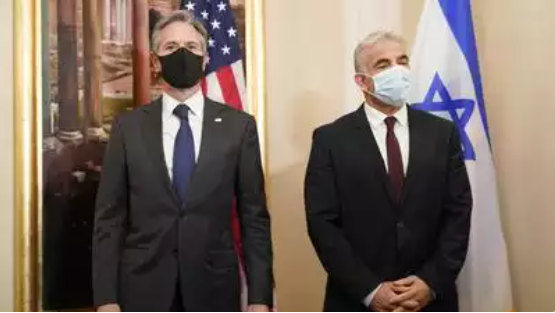